The Good The Sad and The Ugly...

The first graffiti I noticed, really noticed, was a tag "F is for Fun" on the Dixon Street steps railing in Wellington. I'm always drawn to positivity so this leapt out at me and once my eyes had adjusted to see street art, I became obsessed.
I've taken over 5,000 no frills images on my Nokia 6680 and N8 phones which were then edited in Microsoft Image.
I started The Streetsaid in Oct 2006 and Leftbank in June 2008 (Thanks to the Evil Overlord, Google, 7 years and 5,000 images were deleted overnight ;-( (and Yes, there were a few colourful words and tears shed!) 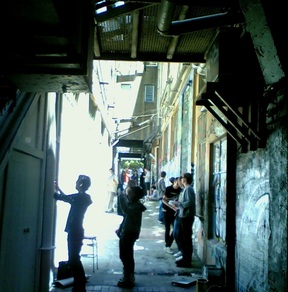 I kept my identity secret for a few years for two reasons.
Being a Justice of the Peace, I didn't want to flaunt supporting something that was illegal.  One of the services I provided in my JP role was as a 'Nominated Adult' for when youths are picked up and need someone to sit with them through their police interview and I never wanted to be in the position where I might have to sit in on an interview of a youth who'd been picked up tagging.
Secondly, I was a grey haired, 40 something year old woman who had no (graffiti) painting ability whatsoever who I was sure no-one would be interested to meet anyway.
So I was surprised when one of the writers sprung me taking photos, realised who I was and started inviting me to all sorts of events.  We also often went scoping for new work together and had endless conversations about who was doing what and getting caught or not.  Thanks to Beware, I started learning the language and he solved so many mysteries for me.  Like times when I thought I recognised a certain hand style but under more than one name etc.  Through him I made a few other friends and a few writers found out who I was but we were able to keep my identity mostly hidden and I chose not to find out the real names of most of the writers I met.

One day, one of my dearest friends, Sin, was in the alley (Leftbank) where a writer was getting up.  Sin started chatting to him but he was clearly drunk and had a nasty on. The conversation came around to one of my sites where I'd posted a selection of this writers pieces not long before and the writer went postal! He told Sin that if he ever saw 'him' he'd stab him!  Sin couldn't wait to tell me - partly because the writer clearly had no clue who I was (in fact I stood near him a few weeks later as he was painting) but also because he was about half my height and Sin knew I wouldn't be the slightest bit intimidated. We both laughed at the time but it was becoming clear that not everyone was thrilled about having their art put on the web.

After a while I started noticing the disturbing pattern of ruthless tagging and capping happening in the alley and I sensed that it was a direct result of the website.
I'd started the site for the Leftbank alley because I worked just along the street and I noticed there were always stellar pieces being put up most days but as soon as the toys clicked that everything that was put up in the alley got put up on the website, they started capping and tagging everything.  How I knew it was because of the site is because they'd cap a writers piece then leave a comment asking when their tag or throwie was going to be up on the site.
It didn't take long for the real writers to stop coming down - why would they waste all that time and money putting up a quality piece to be capped by a 5 minute toy throwie?!
Around this time I went to Sydney to get some images to put up on The Streetsaid. Something that stood out for me while I was there was that there were very few tags or caps.  Writers were either much more respectful or the toys were kept more under control.  Either way, I decided I could no longer put any tags or 'shit' up on either of my sites any more.
Unfortunately it was too late for the alley.  Along with the writers keeping away, there was a lot of negative feedback from the residents and the alley got buffed and gated. 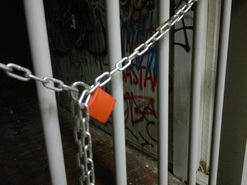 I moved out of the city for a few years and lost contact with everyone.  Sadly, when I returned and started posting again, Beware contacted me to let me know Sin had passed away a year earlier.

Although I've always felt responsible for the alleys demise, I learnt a really important lesson on putting some thought into the potential repercussions of what you draw attention to.

Nowdays I'm happy to settle for the warm fuzzies I get from the collection of pasties, stix, pages from black books and graf related posters that I have hung in my hallway, keeping the stories of them and their creators alive whenever someone shows an interest. And no-one could help but notice the stuff around town has changed in the past few years - more block busters and less throwies and tagging - but I'm always so happy to see fresh 'F is for Fun' tags and constantly inspired by the progress of some of NZs most talented, prolific and dedicated writers who, despite public, police and opposition haters, have kept going about their creativity, staying true to their graf core but also branching out into other money making mediums and finally getting the respect they have always had a right to.